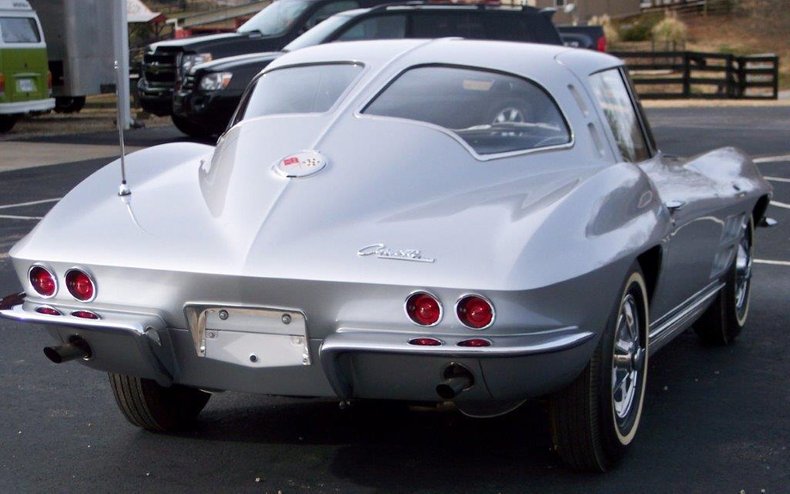 The only engine option on the Z06 was the L84 327-cubic-inch displacement engine with Rochester fuel injection. With factory exhaust manifolds, as required to run the cars in the Sports Car Club of America's production classes, Chevrolet rated the engine at 360 horsepower.

A few of these Corvettes came to be known as known as the “Big Tank” because the package initially had a 36.5-gallon gas tank versus the standard 20-gallon for races such as Sebring and Daytona. At first, the package was only available on coupes because the oversized tank would not fit in the convertible. Chevrolet later lowered the package price and eliminated the big tank from the Z06 package though it remained available as a single add-on option for any coupe.

We offer this beautiful Sebring Silver Sting Ray which enjoys a full Z06 specification, and includes a 360 horsepower fuel injected small block, a close ratio M21 4-speed transmission, and a positraction rear axle with 4:11 gears. Especially rare is its 36-gallon gas tank (N03 option), which was originally included as part of the Z06 package, but dropped early in 1963. That massive fuel tank takes up a large portion of the cargo space, and is the reason this car is referred to as a “big tank” Z06.

This is one of 199 Z06's built that year, and is believed that to be an original "big tanker" example but expert review cannot 100% confirm that fact, since one of the data tags is missing.

This Corvette benefited from a complete restoration in the mid to late 90's and still presents very well today. Only a few minor paint flaws are noted. The car was also judged in the mid 90's as "Bloomington Silver." This great and rare car missed Bloomington Gold only because it's original data tag was not replaced during the restoration and it now sports a repro data tag. Unfortunately, this was common practice "back in the day" when no one valued the data tag or saw the potential appreciation of these cars. The asking price here is reflective of the repro data tag issue, and represents a great buying opportunity for a collector who may not wish to buy a perfect "big tanker" which now bring as much as $750,000.